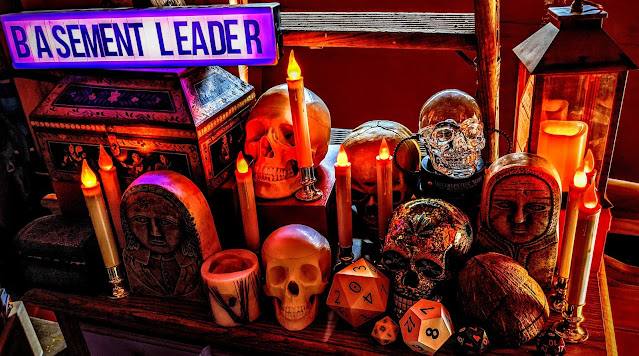 The lifeless body of the Welt bolts upright in shock. She seems surprised and wary at the same time, as if this state is not all that uncommon to her. As she searches her pockets for something “my pocket orb is missing...has anyone seen it? Oh, my name is Mistla.” Smudge calls her pocket orb and it is no surprise when a buzzing sound comes from Flaca’s pocket. She flicks her eyes and mutter’s “whatever” as she hands it back. 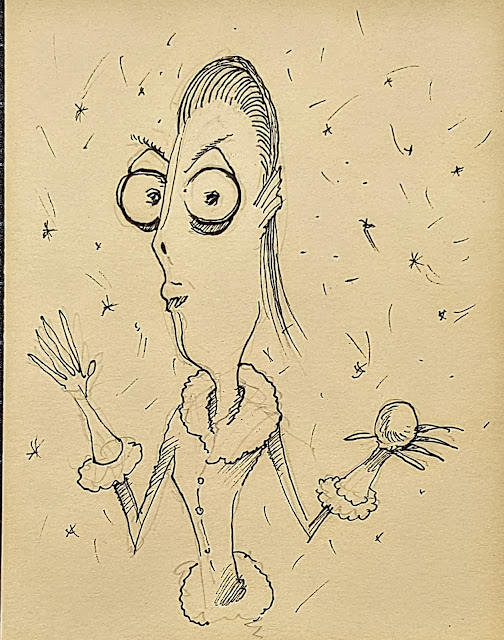 Klomp, Smudge and Flaca ask Philton about their mission to save the orphans, namely in what direction they should go, where the “Life Crystals” are and any other useful details that could help them on their quest. Philton’s reply is to shrug his shoulders. 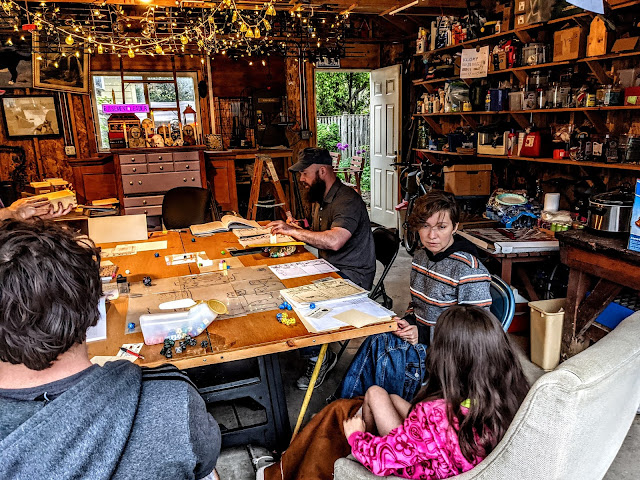 Flaca puts on a half mask covered in tiny square mirrors which causes her to shrink down and transform into a disco themed Zwinkie. Shimmy joins her to fly up in order to get a birds eye view of the best direction to go. The region is a tundronic wasteland, no trees or vegetation. The slightly hilly horizon is punctuated by icy morasses of floating bergs. The south is dominated by a massive icecano belching forth a plume of frigid crystals. Between them and the Ruld icecano is a darker speck which could be a settlement. The troupe decides to head off in that direction. 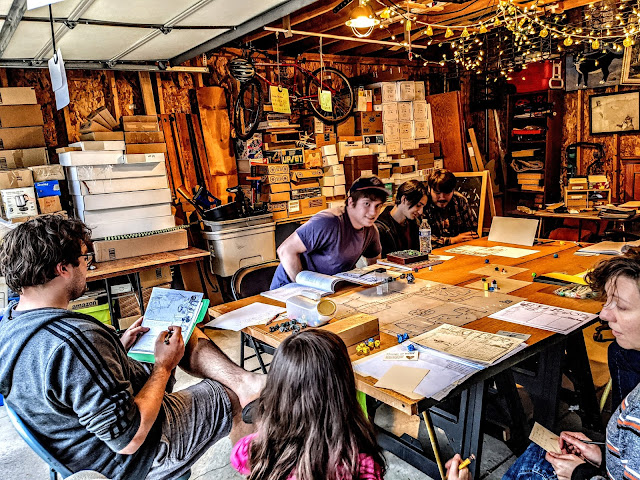 Shimmy spots a fast moving object moving towards the group, but forgets to mention it before it is on them. Suddenly, a 16 foot tall bipeedal Behemoth Snow Leopardoid atop a glistening anti-grav chariot is on them. 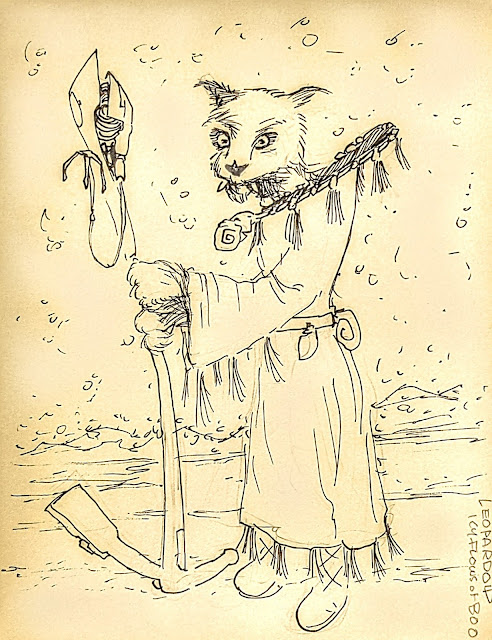 The troupe splits up into several groups as the beast cuts through them. The chariot whizzes right over Smock and then speeds directly at Klomp. Klomp recalls from urk schul a ditty about Leoprdoids:
Oh Leopardoid
I am a bad boid
I must sleep
Or my life is null
And void.
The furry giant weilds a scraww, which is a massive pole arm with a grapnel device. the BSL fires the hook, but is unable to snag a victim. The Kortluskian 1/3rd Urk dodges the vehicle and jumps up onto the chariot. The vehicle's platform is smooth and Klomp slips off, pullin the BSL down into the snow with him. 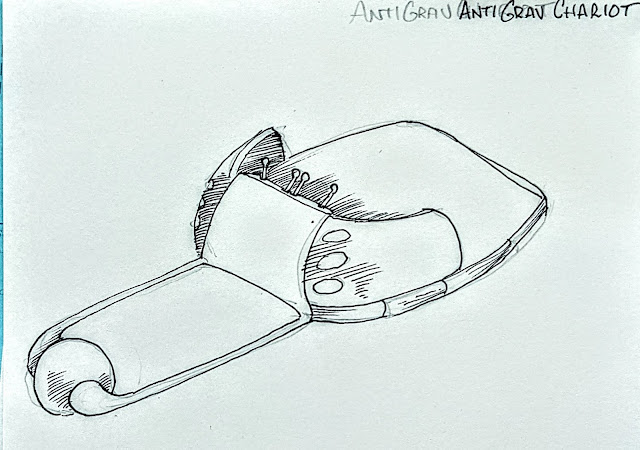 The 1/3rd Urk gets in a mighty blow with his swordikjrom. The wounded monster is taken out seconds later by Smudge’s barrage of Finger Flicks. As the riderless chariot slows to a halt, Shimmy flies over to it and begins pulling on the levers. She is able to figure out how it is controlled. The troupe clambers on board, using various adhesives to keep themselves from falling off the polished mehtahl of the bed of the fast moving chariot. 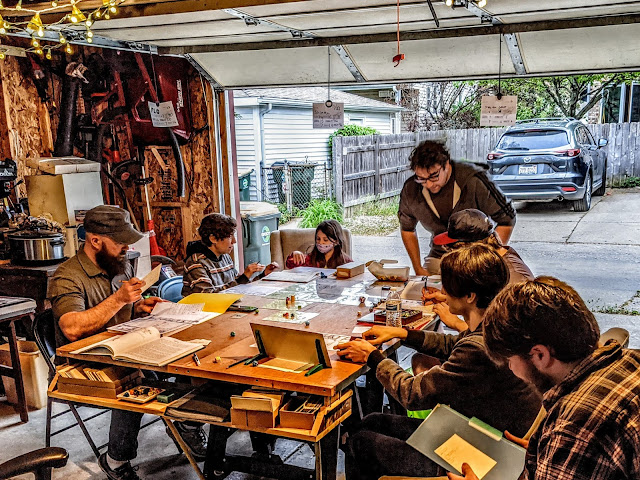 The troupe begins heading south...you know...to save the orphans.
Here's this PEOG's Quiz. Remember, each correct answer is worth 1 xp:
1) What does “all points” mean? (a successful Nimbality check)
2) What is Smudge’s friend's name? (Oggo Goggo)
3) Where does Philton’s mom live? (in a small tin)
4) What is Mistla’s quill chat name? (Mighty Dragon 11)
5) What does BSL stand for? (Behemoth Snow Leopardoid)
6) What does BAMF stand for? (Bad Ath Fooglee Mucker)
7) What does the chariot fly like? (a landspeeder)
8) What does Lou do for a living? (he is a dice designer)
9) Name a pet mentioned this evening. (Kortluskia)
10) What is the name of a texting “Gic? (Scroll Chat)
Join us next time for the Icy Flows of Boo #3! 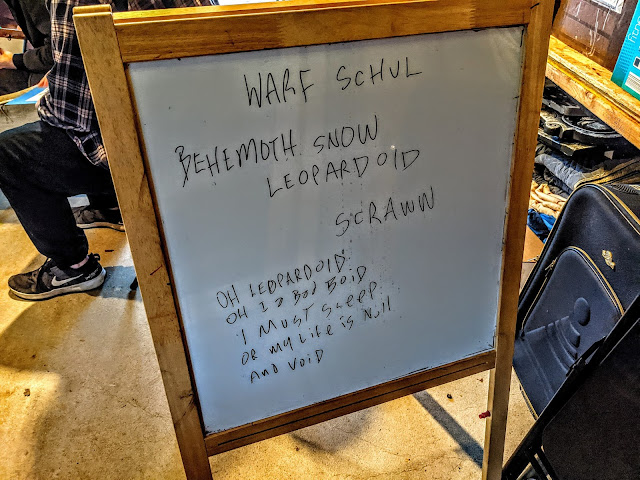 Troupe: Philton (James), Flaca (Grace), Shimmy (Emelia), Smock (Caleb) and Gyro as Barney (Jimmy).
Garage Leader: Ro
Location: Ro's Garage (Not to be confused with Joe's Garage)
Link to Preceding Adventure: Dusty PennGooInn #4 September 13th 2020
Link to Next Adventure: Icy Flows of Boo #2 May 16th 2021
NOTE: This descriptor of events was automatically captured by the Klogg Narr 'Gic and transcribed into a text document by ASSININE (Artificial Serebral System Ingeniously Not Incongruous Nor Equivocal, a new Smorkk technology).
ANOTHER NOTE: This adventure experience picks up from the events in Dusty PennGooInn #4 September 13th 2020.
Read more »
Posted by Ro at 3:11 PM No comments:

Troupe: THE straw prince, Shtick and Oda
Basement Leader: Ro
Baba tells them there is no spell casting in the house. Closing the door behind them, Oda, Shtick and THE straw prince step out onto the path in front of the old woman’s house. They carefully position themselves so that they are right at the point where it splits, going either north or northeast.
Read more »
Posted by Ro at 10:09 AM No comments:

Troupe: THE straw prince, Shtick and Oda
Basement Leader: Ro
The wind is blowing through the boards of a long abandoned farmhouse. A rainstorm has just moved on leaving a few puddles. Shtick being an adventurous creature followed the rain inland. Erkins are creatures of flame who usually keep to themselves. Contrary to what most believe, they love making water hiss and evaporate. He had never seen a Millibrick before and when he playfully tried to melt it, thousands of it’s friends chased him to the old farm.  Here they trapped him by quickly assembling themselves into a brick shed. Through a narrow opening he can see an old union suit on a clothesline whip around crazily.
Read more »
Posted by Ro at 1:31 PM 2 comments:

Troupe: Gyro, Indus and Philton
Garage Leader: Ro
Medium: Spatially Enhanced RPG (played in my open garage)
Varkendor and Halcyon have unfinished business and are unable to stay with the troupe. Varkendor, being an Arcanist skilled in the art, gives Gyro, Indus and Philton who will be traveling to...someplace only described as mightily cold, a piece of “Teleportal Bark”. This vascular cambium apparently has the magical power to act as a beacon allowing Varkendor to pinpoint its runic coordinational position within the T-zoid of Real Life. This will allow them to catch up later on.
Read more »
Posted by Ro at 4:24 PM 2 comments:

Troupe: Varkendor, Gyro, Indus, Halcyon and Philton
Garage Leader: Ro
Medium: Spatially Enhanced RPG (played in my open garage)
In this instalment the players are chastised for not having seen “The Producers”. 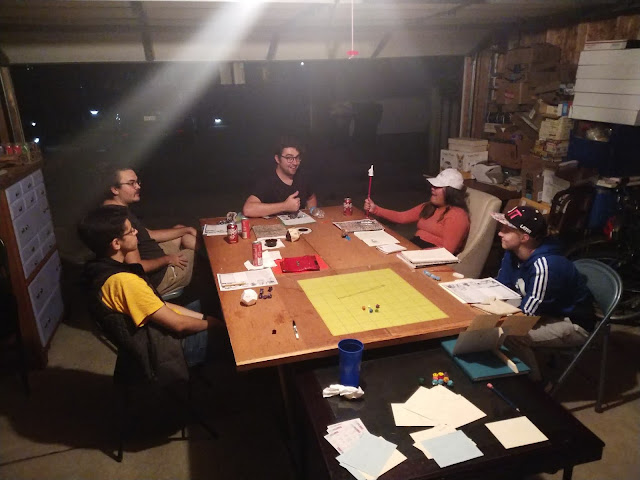 A few bored Gnylls are scattered around the tavern. Among them sits a lone Cattoid, ears low, eyes slits. The troupe is still eating breakfast. Boogah has returned after being gone for only a moment. He explains the expedition is short handed and motions toward the swinging doors where two figures are emerging. The taller one may once have been a majestic wizard. At the moment he is a creaky looking mannequin covered with bark and random leaves. The shorter is a squat metallic box with mechanical limbs. Its upper limbs are over long while the lower are too short. Boogah quickly introduces them, “This is Varkendor the Arcanist and Gyro the Robut.”
Read more »
Posted by Ro at 9:59 PM No comments: