Once the “Yon of Ofaz” finished, the newest chapter of my Crypts-N-Creepies milieu began. Welcome to “Crack Town Adventures”. It’s Been a while, let’s dive in.

These game sessions started many months ago and so thus far have not been recorded here. For clarity, we will start with what went down from last week's game. In a future post I’ll attempt to summarize what went before. We will call this game session # 10, which is a guess.

For last  Sunday's PEOG (Proverbial Evening Of Gaming) on February 9th, we had two newbies, so let’s start with them:

Meet Mr. Crusty, a 7 ft. Tarn. Technically, Clara is not a newbie to RPG's, although thoroughly questioned, either we could not learn or she could not recall any details of these recent experiences.

Meet Yorbin, a 7 ft. Jring. Mr. Crusty is in fact her pet, which she rescued as a child. When she left her wealthy family her mom had a heart attack (3d6 dam, I think we rolled a 13).

For this PEOG our regulars also showed. Mark is playing Klomp a Kortluskian Thurd Urk.

Moise has been playing since the “Yon of Ofaz”, his current character is Gorgonzola (a Peribold) with a small tree growing out of his head. (Note this is an older pic, I think he was in the water closet when I took the other pics).

Caleb has also been playing since the “Yon of Ofaz”, his current character is Doop (a Bulukia) who smokes cigarettes.


Our intrepid group has returned to Crack Town from the underground labyrinth of secret crypts and geomorphic villages beneath Krumms. The owner of Krumms, Spunderella Larue must leave Crack Town in order to fulfill some important species oriented obligation. Before leaving with a band of armor-clad Warfs, she entrusts the management of her establishment (the bar known as Krumms) to Doop and Marylyn Mindless. With that she leaves, promising to return in a few months.


The troupe, led by Doop decide that Krums should be renamed Doop's Scoop, complete with animated neon sign. The interior is redecorated to mirror the Cuddly Crab, however they decide to leave the myriad of closed circuit crystal orbs (which constantly broadcast Sportsball games of the past, present and future), the Juke box (filled with Gargorats that play tiny instruments) and the electro-mechanical arcade game called "Strike the Dromedary".


The next day a graceful white winged Vey carriage floats down from the heavens and alights in blasted crater park. Seated inside are two visitors from the far off Cloudlands above the Whirlette Islands. We meet the tall and graceful Jring named Yorbin and her childhood per "Mr. Crusty"..

The Duos Backstory: Yorbin has chosen to leave her wealthy home because the tiny little Furby-sized Tarn she rescued is now as big as a house. She has been keeping her pet hidden from the parents...but now it's time to leave the roost. Her childhood pet is called "Mr. Crusty". The duo decides to leave the puffy soft land of high living behind. Traveling upwards into the high currents of windy ways far above the Urth, they rocket along, seeing very little because they are so high up. On the way down they glimpse a vast forest of Fir like trees and scrub. As they get closer they are able to see Crack Town. The little hill looks out of place in this landscape (as it should, Crack Town magically appears in a new location every 3d6 days).

Back to the present: Several members of the troupe see this magnificent Vey carriage land. Doop, Klomp and Gorgonzola all climb down from the higher side of Crack Town and gather around the newbies. They meet the duo and after some brief exchanges convince the them to come up to Doops's Scoop and spend some money. There is also slight interest in the ancient electro-mechanical game "Strike the Dromedary". After some more chit chat the group is interrupted by a hume sized figure, completely covered in matted hair jumping wildly up an down outside a nearby window. 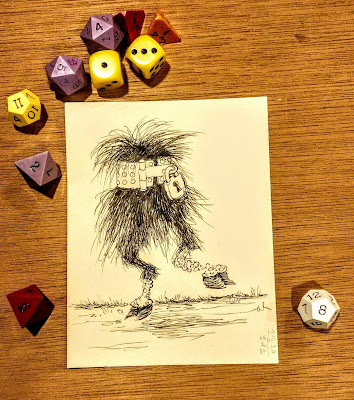 This excitable creature has a metal band and lock around it, as it jumps about muffle speech can be heard. After Klomp broke a pair of bolt cutters on the lock, he fipped it off using brute muscle power. Removal of the band only revealed more hair, the creature begged to be fed, because it was really hungry. After pulling a keg of ale into its mouth it pleaded for more. Someone suggested the Yek, but Gorgonzola quickly squashed that idea. "How about Mr. Crusty"? The creature really got excited about the thought of having the giant Tarn in its mouth. As it started chasing Mr. Crusty around the bar, Yorbin made an attempt to grab her childhood pet and fly away, but sadly missed her Nimbality check (flying indoors is tricky). The creature is near Mr. Crusty, it's mouth open... Oh, I forgot, at some point somebody (Klomp?) cut one of the creatures legs off...and it ate that. It considered eating itself. 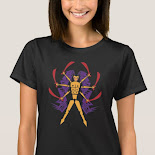 Sneeky Peeky of the Rule Book.